It was great to be back down at Fraser’s place once again, it is a proper playground

Every now and then I head off into the hills with some friends. This time it was to be Gordon and Rick, whom I have worked with for a number of years at the Crisis Open Christmas shelters, and I had arranged with my friend Fraser from Coastal Survival that we would come down and spend time at his place in the woods in Dorset.

Rick drove us down there in his campervan so it did feel as though we were off on a holiday from the start. I took this picture as we neared Fraser’s place. The angle is such that you can’t see the horse and it looks like the little dog at the back is pushing the Barrel Top along.

I found myself a nice spot for my hammock, on a bit of a slope so slightly slippy but the view was worth it. I had also brought along a couple of other hammocks for Gordon and Rick to use.

The rest of the Friday was spent teaching the guys how to put their hammocks and tarps up, carrying all the kit up to the site and chilling around the fire eating excellent food cooked by Fraser.

Food is always a dominant part of any visit to Fraser’s place. Breakfasts were a slow relaxed affair with plenty to eat and the coffee was excellent as well.

As usual whenever I spotted some beautiful plants out came my trusty phone camera. I am very impressed with the results I get from the camera on my Nokia Lumia 820 phone (not being sponsored to say that!).

That first morning was spent collecting ramsons, or wild garlic (Allium ursinum), to pickle for later use. I’ll do a separate post on this later.

Lunch was a tortilla cooked on the open fire with the ransom adding that lovely garlicky flavour.

One of my main aims of the weekend was to find some chill-out time. I did that with my trusty EDC hammock chair from UKHammocks. The views were wonderful.

Saturday afternoon was spent down on the coast near Bridport foraging for crabs, small fish, limpets and seaweed. We met some other friends on the coast – Paul Burkhardt and Paul Newman – while we were there. Both Pauls were also looking for fossils. This part of the coast is full of fossilised sea creatures and it doesn’t take long to find them once you get your eye in.

The walk along the coast was a very pleasant affair but I was ever mindful of the risk of the clay cliff faces collapsing. With all the recent rain they did look rather unstable, with lots of collapsed areas.

I made a couple of videos on the Saturday:

Dinner that night was a lovely risotto made with shellfish stock and a garnish of seaweed, topped with a chop for the non-vegetarians. It all went down a treat.

The Saturday evening was a quiet affair chilling out around the fire and testing out Fraser’s large gas wood burners (or more properly re-burners, as the gases produced are recirculated and reburned). I got a few fire faces and particularly like the Ent’s face (Lord of the Rings tree giant) in the one on the left.

On the Sunday morning we had a beautiful walk through the woods looking at the new growth, the animal tracks and the views. I took the top two pictures that morning just to see what kind of detail my phone camera could give me. The crab picture was from the day before. 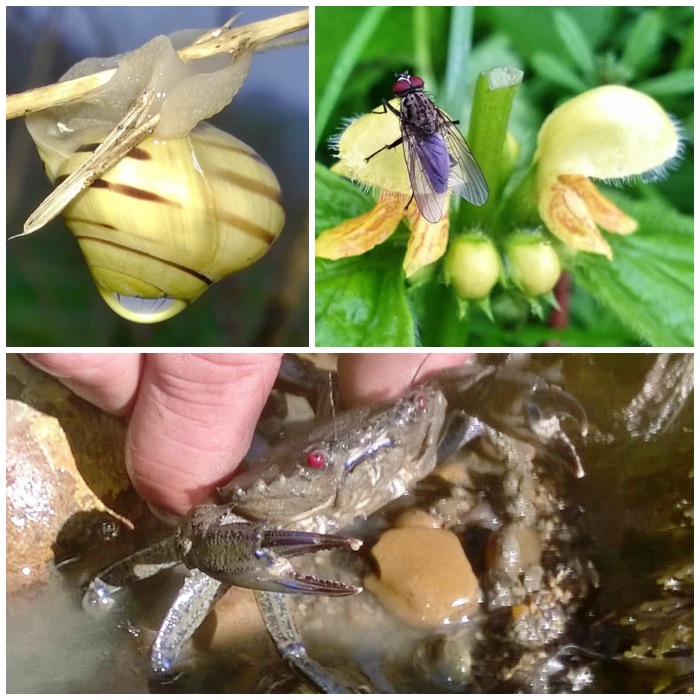 I took a video that morning but encountered a few problems making it. The problem with the second video was that I managed to delete the original files before saving the clip in iMovie. I could then only view the clip in iMovie and couldn’t upload it to YouTube. To get round this I ran the clip on the iMovie app and re-videoed it with my phone camera (I hope that all makes sense). Not as high quality as the first one but I still want to post it here.

After the woodland walk I brought my bows up for a bit of stump and target shooting.

I do like wandering around just shooting at stumps or the bases of trees. While I was out with Gordon that morning we stumbled across two large fallow deer. It was quite a sight, but they were too quick for me to get my camera out.

Three of the more unusual things I spotted over the weekend: some hazel coppice growing through an artist’s fungus, scores of these beautiful snails, and fresh-water tracks in the blue clay of the beach.

A lot of Sunday, though, was spent under the parachute staying warm by the fire and listening to the rain hammering down. In the bottom picture you can see the different traps Fraser has made for fishing and catching small animals on the ground.

After all that rain we decided it was time to head off down to the local pub for a few beers and a game or two of pool.

I now have one of Fraser’s gas wood (re-)burning stoves that you can see in the above picture and intend to really test it out over the summer.

On that final evening in the pub I edited the last of my clips to make this short video:

Monday morning was a pack-up-and-away day to try and miss the Bank Holiday traffic. It was great to be back down at Fraser’s place once again, it is a proper playground.