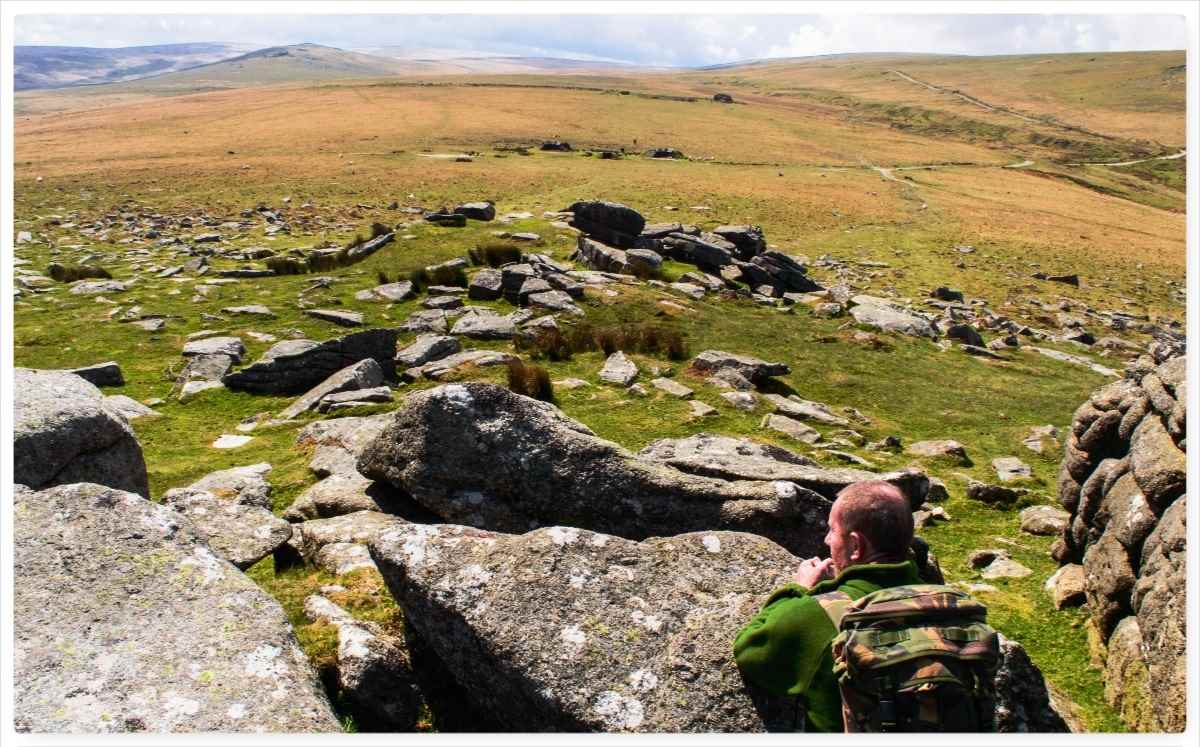 Remember the rule of leaving everything well alone on

It was time for Dartmoor again in early May (seems like a second home to me these days) with some of my fellow Sea and Royal Marines Cadets instructors.

The weather was great but as usual Dartmoor threw up a few surprises.

We were staying at the salubrious accommodation that is Okehampton Army Camp (I can sense the shivers running down the spines of certain readers as we speak) however this time we managed to bag the officers quarters as we were the first to arrive.

I was joined initially by my friends Graham and Perry before the rest of the gang arrived in the evening. The view from my billet was great as the whole of North Moor was visible.

First thing on Saturday morning our most senior of instructors Alan Lewis took everyone out to loosen up with a bit of Tai Chi. It was short and to the point but the setting was fantastic.

Alan swears by Tai Chi and it sure keeps him active.

After breakfast it was time for some classes. We were joined by fellow instructors Dave Lewis, Chris Bonfield and Ben McDonald along with some of this years Basic Expedition Leader students.

The focus for the Saturday was on navigation and group leadership.

Dave, Chris and Ben went off with a group of students each and Graham, Perry and myself set off onto the moors to keep an eye on them. Needless to say that as things went along they got pretty daft – always is with this pair 🙂

The weather held well and we met up with each of the groups as we went along. Everyone got time to practice their navigation and group leadership with a few scenarios thrown in for good measure – I must thank Ben, Chris and Dave for all this as they did all the work – so cheers guys.

Much can be said about the beauty of Dartmoor with its Tors and dramatic skies but you do need to remember where you are. Along the way we passed numerous shell holes with the odd rusting casing lying around. Also there were the odd pile of spent rounds that had not been cleaned up but there can be live ammunition found.

We spotted lying nestled in the grass a live grenade (looked like one from the new grenade launchers mounted on vehicles). I took a quick snap with full zoom and we logged its position on the GPS so as to report its position back at the camp. Remember the rule of leaving everything well alone on Military Training Areas.

Nature has it hard as well out on the moor – mind you the frog I spotted sunning itself looked happy. It had been raining really hard the day before (you can see the amount of moss on the roof) and one little lamb had crawled into a crack in the rocks to shelter but did not make it through the night.

We also found part of a lambs leg lying in the grass – it was very fresh as so I assume it made for a tasty meal for some predator.

Sunday morning brought us back to Meldon Viaduct (regular readers may remember this from two years ago) for our abseil – known as ‘The Big Oke‘ Abseil. It is a cracker of a drop – a 100 foot free fall abseil.

Perry an Graham set up the ropes and we were soon away.

For some this was the first time they had abseiled and it is one to remember. The last time we were there the weather was atrocious so we could not drop from the centre but this time the weather was kind to us and the views were great.

The drop made for a cracking video.

As I said Dartmoor is like a second home to me (just come back from a Gold DofE training expedition on the moor) so I am looking forward to getting back down there soon.