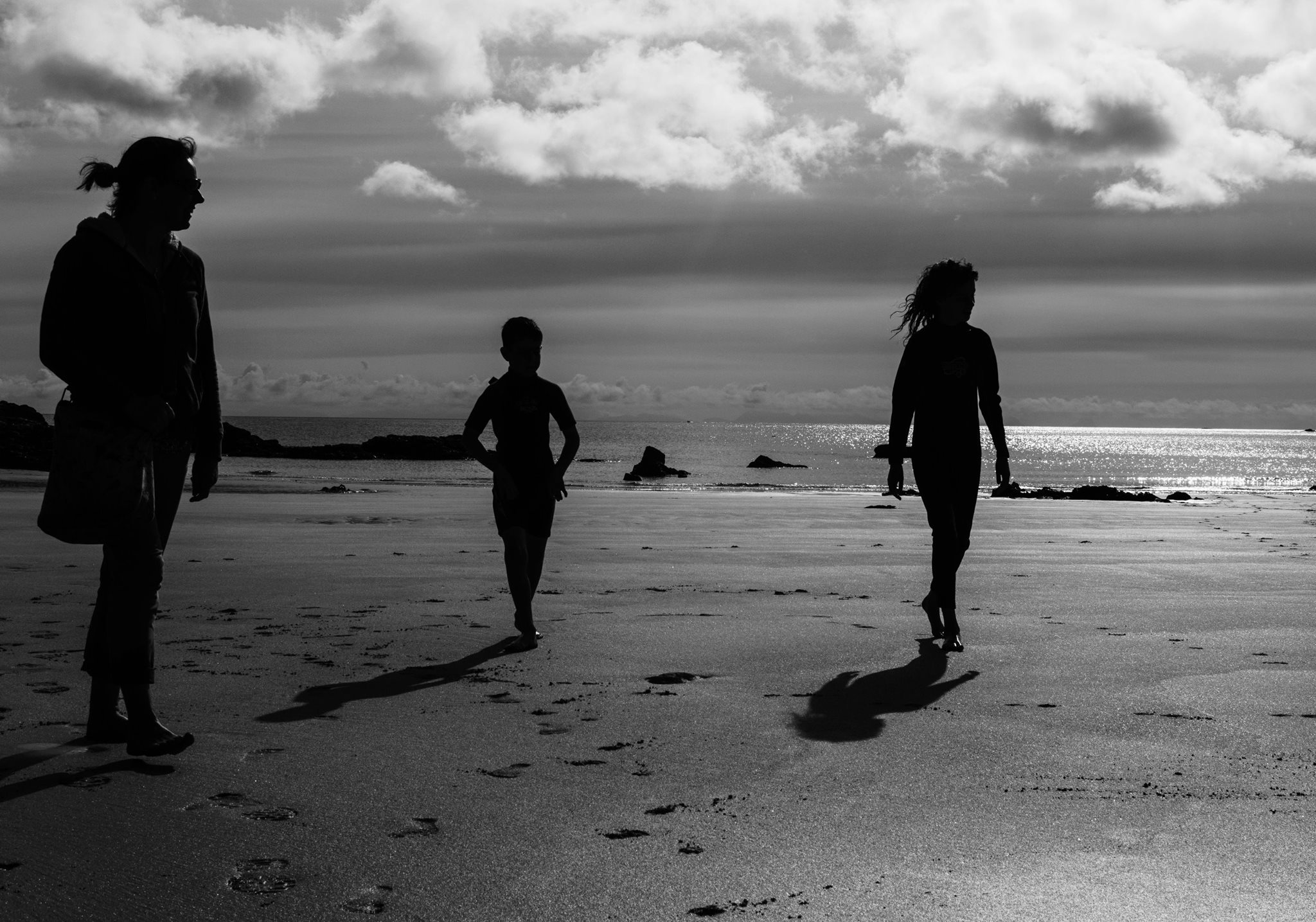 We clocked up nearly 2000 miles on the road this summer galavanting around Scotland visiting friends and family. Every couple of years we travel up to the Isle of Lewis to visit my family however this year we decided to call in at a few more friends en route.

Our first port of call was to stop off at Balquhidder Church in the beautiful Trossachs in the Highlands of Scotland. This is where my Father’s side of the family come from and where Alison and I got married. Buried in the local graveyard are my Gran and Grandpa and the falls above the church are well worth a visit.

Then it was off to Ullapool to pick up the ferry over to Stornoway on the Isle of Lewis. My mother Joan and stepfather Abby live in the village of Port of Ness at the northernmost tip of the island. This was to be our base for the next week.

Our kids Catherine and Finlay were really looking forward to this visit as they had not stayed at their Grannie Port’s house before.

Much of our time was spent down on the beach at Port or at Stoth as the weather turned out to be glorious. This is where I spent much of my childhood and it was great to see my children loving it as well.

I took the family and my brother Finlay to visit my Dad Freddie’s grave. It is located on the Machair right by the coast and the view are stunning. My Dad was also a part-time lighthouse keeper at the Butt of Lewis so it was a pity that it was closed to the public – the views are fantastic from the top.

It was great to catch up with everyone such as my old mate Peche and his wife Jean who I had not seen for many a year. The kids spent a lot of time with their cousins Kenny John, Courtney and Lauren. Kenny John in particular was very excited that Finlay was coming to visit and the two of them had great fun, playing hide and seek and climbing trees together.

We spent time most days with my sister Tina, my niece Natasha and her lovely little daughter Lily Mai. As we only get to go north every couple of years the difference in the little ones is always amazing – the last time I had seen Lily Mai she was still a babe in arms.

My sister Tina is a keen walker and is out for a five mile walk most days. I decided to photograph her one day on the coast and was really chuffed with the results. It is not all play though as the peats were calling and I went out a couple of evenings to lift and turn them with my brother-in-law Kenny – the midgies won in the end on both evenings and we were forced to beat a hasty retreat.

It was also great to catch up with Andy Burns each day as we were out and about. Andy is a great photographer and gets some incredible shots as his croft overlooks Port Beach.

While we were on Lewis my Uncle Dods was once again leading the annual Guga hunt. They arrived back the day before we were due to leave. I popped over to Stornoway to catch them offloading the Gugas. That night the kids, Abby and myself enjoyed a good feast of Guga.

Before we left we managed to get out to visit the Black House at Arnol where I had a great time talking with the wardens about traditional crafts and how they were made and used (for example making rope out of heather).

The time had flown by so fast and it was soon time to say goodbye to my Mum, Abby and the rest of the family.

After picking up the ferry back to the mainland we headed for Banchory over on the East Coast of Scotland. Our friends Kate and John live there now. We met Kate on a Raleigh International expedition to Chile in 1996 and have been great friends since. They have two lads – Chris and Matthew.

We spent three days exploring the local area and managed to get a real feast of blueberries on Scolty Hill.

Stopping off at the Thundering Falls of Feugh we were hoping to spot some leaping salmon however we were amazed to spot an otter fishing in the falls below our feet – it was quite a sight.

Our next stop wasThornhill in Stirlingshire to visit our friends Kate and Roddy. Alison has been friends with Kate since University and we always try and visit them when we can.

We spent a great afternoon at Doune Castle exploring its secrets and walking in its grounds. Apart from its rich historical past in recent years it has attracted many tourists for its use in the film industry: Monty Python and the Holy Grail featured the castle and scenes from the TV series Outlander were shot here.

Located nearby is the beautiful Flanders Moss nature reserve. It is one of the last blanket lowland peat bogs in the country and is home to some rare flora and fauna.

The next stop was to visit my Uncle George in Crieff. It was also great to see my cousin Leanne and her son Robbi – another one who has shot up :-).

The we popped in to Callander to see my Aunty Catherine and Uncle Fred, who had just celebrated his 90th birthday the day before.

Our final night was spent back in England visiting Alison’s mum Beryl in Stockport. It was great to stop off there as no road trip North up the M6 would be complete without stopping off and letting the kids spend time with their Grandma.

It felt like we covered a lot of ground on this holiday however it was over in a flash. I caught up with many folk I had not seen in a long time (it was hard to recollect names at times) but I left Scotland with some great memories – I hope my kids felt the same as well.