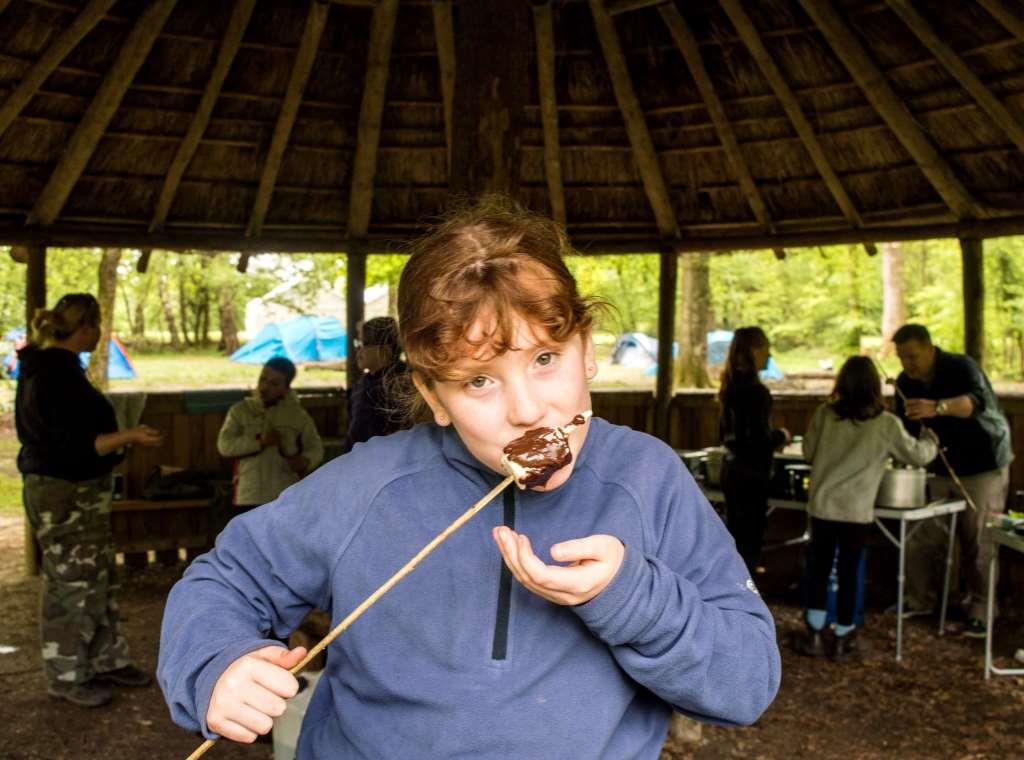 Recently I have been reading a lot on social media about how kids and adults seemingly do not interact enough with nature. This is now the fourth year I have written about our annual trip to the New Forest so I would like to say that whoever writes these general stories has never been out with the Sea Cadets. We immerse both our cadets and staff in nature, so much so that they keep coming back for more. This is the story of just one of the many expeditions we run throughout the year.

This particular expedition is arranged each year so that we can skill up our cadets and staff in Adventurous Training (AT) activities and also to support the annual HMS Hood Remembrance Service at Boldre church in the New Forest.

The weekend is organised by Chief Petty Officer Paul Townsend (City of London Sea Cadets) and we have cadets and staff attending both from London and Southern areas.

Our aim is to immerse everyone fully in nature as well as teaching them the traditional AT activities such as map reading, compass work and camping. This weekend saw the cadets finding the skeleton of a fox, observing pond life and scrambling all over the woods.

We have various groups set up over the weekend focusing on different skills. There was a group for the Juniors, various groups for the older cadets and a Duke of Edinburgh’s (DofE) group out as well.

I took out a group with Paul, Jess and some of the older cadets, The cadets were looking to gain various camping tickets and Jess was under training for her Basic Expedition Leaders (BEL) award. This requires her to have a high level of navigation skill however it also requires he to have the skill to pass that knowledge onto others.

Now it is not all hard work and no play by any means. Soon the cadets were flying through the puddles and we took time to rest up on the Saturday afternoon at the hotel near Beauly Rd station. On the way back to the campsite at Ferny Crofts the way got pretty boggy so it was fun watching the cadets trying to keep there feet dry. They soon learnt how to select a good route along the way.

Evening activities involved the usual football, netball and run out games before it was marshmallow time.

We had enough wood this year for the cadets to have their own fire and soon it was sparking away merrily.

On the Sunday morning a group of cadets go off to the remembrance service at Boldre church while the rest of us get on with the mornings activities.

Simon was thankfully with us again this year and ran the galley in the roundhouse. He certainly can make some great meals with very little in the way of ingredients. The Juniors meanwhile cracked on with firelighting with Charlie and cooking with Chrissie. I enjoyed some giant toasted chocolate marshmallows however the orange cakes were left in the embers for a little too long I think 🙂

The rest of the staff and the older cadets cracked on with lots of classes. This allowed the trainee instructors like Sarah, Jess and James to gain some valuable time teaching AT skills while training up for their BEL award.

Classes included tent pitching, first aid, bag packing, cooking and compass work. I did not see much of the DofE team as they were out on their expedition on both days however reports back were that they all successfully completed the weekend.

While all this was going on on the Sunday morning the group at Boldre church put on a fine parade and learnt a bit more about HMS Hood. In all my years going to the New Forest for this trip I have never managed once to get to the parade – mind you that would involve me putting a uniform on 😉

As I get older the years seem to pass quicker however each year has been packed full of fun. I am looking forward to many more years of visiting the New Forest and passing on my knowledge of nature to others so that they can continue this skilling up cycle.

Previous years in the New Forest

Welcome to Part 4 of this series on bushcraft candles.

This type of candle is slightly different to the others I have been building in this series. The main difference is that these Fire Face Candles require the use of power tools for speed of build. (I suppose they could be built with carpenters’ hand tools but that will be for another post.)

In my research on this series I came across a You Tube video on this type of candle from Marcels Workshop called ‘How to make a Fire Log 2013’. I have put a link to the video at the end of the post.

These candles were made for decoration only in my garden (for a party) but they could be used as stoves if you want. My last post in this series I think will be on testing slightly different variations on this method as rocket stoves.

As you can see you can get excellent Fire Faces out of these candles. Here is how you make one.

I used a long western red cedar log for the candles. After sawing it into 3 smaller logs I marked a hole on the top and drilled a small pilot hole down into the log. I did not place the mark dead centre so as to ensure the faces when they were completed lit up well.

I found it helpful to drill a pilot hole before switching to a larger drill piece (24mm): I did test going directly to the larger piece without a pilot hole and found for this type of wood drilling in through the top with a pilot first worked better.

The drill piece for the pilot I used here was 12mm. As it was shorter than the log I did not need to mark it with tape in case it came out the bottom. I secured the log between my feet as my vice was not big enough. If you are concerned about this drilling method I would advise that you secure the log to a work surface somehow before drilling.

Then with the 24mm drill I used tape to mark out how deep I needed to go and drilled the chimney out.

I laid the drill piece beside the log again and using the tape marked off the area where I would drill the mouth. The trick is to make sure that the mouth is above the bottom of the chimney. This will create a ‘well’ that you can fill with the wick and wax.

I used an 18mm drill piece to create the mouth. The 24mm drill would have worked just as well I imagine (I will use that for the Rocket Stoves). Here you can see on the right that the mouth connected with the chimney nicely.

I drilled out some eyes (connecting to the chimney) and using the drill decorated the logs with facial features. I did secure the logs for this but if you have the time and skill a good knife will do the same job.

In all it took me about half an hour to get to this stage.

I filled a pot up with wax and three wicks and heated it til the wax melted.

Using pliers and a stick I pushed the wick into the mouth down towards the base of the chimney. Leave a good 2 or 3cms protruding from the mouth at this stage.

I used a stick pushed down the chimney to tamp the wick down into the well. If you do not leave some wick protruding through the mouth it may all get pushed into the well. Then I filled the well with melted wax by pouring it in from the top of the chimney. The wax goes everywhere: I did all this outside.

So after about 45 minutes I had three Fire Face Candles ready to fire up.

I set them out in the garden ready to be lit later.

To fire them up just take a match and light the end of the wax-coated wick protruding from the mouth. In no time I had one going well.

This picture was taken through the mouth and you can see the wick is burning well at the base of the chimney.

The other two candles did not fire up initially. That was because I hadn’t trusted the wick alone and had inserted some pig fat impregnated paper into the chimney of each of these two. I thought this would help them along but all it did was cut the airflow and so the wick kept going out. After a bit of faffing about and decision making I stripped everything out apart from the wick and re-lit them.

They did not take long to fire up properly. Lesson learnt I think.

I was quite surprised how long they lasted for. This picture was taken 45 minutes into the burn and you can see the face on the first one is starting to burn out. Next time I may place the chimney more centrally in the log.

The kids loved the candles and would come right up to them to peer into the faces. I think that the next time I set them up I will put them in a cordoned off area as I was a little bit concerned that some of the more boistrous kids could knock them over.

I brought them all together to get a better picture and also so that they were in one area where I could keep an eye on them. This picture was taken about an hour after I had lit the first one.

One hour 15 minutes later and the first one had lost its face but was still going strong. There was a bit of wind on the night I tested them and this really helped maintain the flames. When I tested my first candles there was no wind and I had to continually waft them to keep them going.

My favourite picture of the evening. It looks like the front face of a Saxon warriors metal helmet to me.

A view from above .

In the end the candles lasted just under 2 hours so I was very pleased with the results.

As there was plenty of wood left on the candles I popped them on the fire and finally sat beside it relaxing with my wife Alison after everyone had gone, the kids were in bed and we’d finished clearing up.
The candles had one last spurt of life and I got a few more Fire Faces to add to my collection.

In summary I would say that these were a pretty easy candle to make if you have the tools and they do last for a decent amount of time.

If I do get hold of some bigger logs I will try this again to see if I get the same results.

My last post in this Finnish/Swedish Candle series will be to look at using power tools to create rocket stoves from logs.