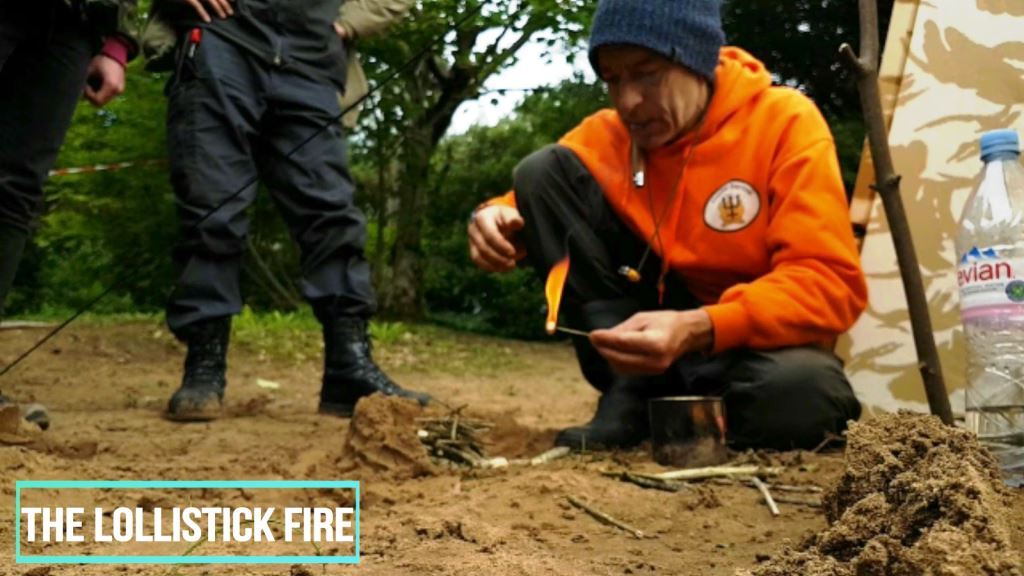 When you have limited resources and the elements may be against you, then you may wish to consider the ‘Lolli Stick Fire’.

At the 2017 BCUK Bushmoot my good friend Fraser Christian from Coastal Survival was running a 48hr workshop on Coastal Survival. One of the classes was on lighting a fire on the beach in windy conditions with very limited resources – he called this the ‘Lolli Stick Fire’.

Fraser built using sand a little reflector wall in a horse shoe shape and within it he laid a platform of dry dead twigs. On the surface of this platform he laid three loose piles of twigs in a ‘U’ shape. On top of this ‘U’ shape he laid a further pile of loose twigs making a roof. This shape left a hole in the side to add a firelighter.

Rather than using a whole firelighter Fraser cut a firelighter into 8 pieces and stuck one of these small pieces onto a thin sharp twig (and here likened it to a ‘Lolli Stick’). He lit this in the shelter of his tarp and easily popped it into the middle of his twigs.

The flames spread through the twigs very easily as they were loosely laid and Fraser topped them off with further twigs to get the fire going really well. This process only took around a minute and he soon had a cup of water pushed up against the side of the fire.

The small reflector wall helped bounce the heat back onto the cup and so boil the water quite quickly.

You can see it in action in the short video below.

Fraser uses this technique on the coast as the reflector wall protects the fire from the fierce winds and because of the minimal resources needed to light and maintain it. I incorporated this technique into our Starter Course at the Bushmoot and everyone easily got there fires going with it with very limited resources.

The ‘Lolli Stick’ is safe to handle, requires only an eighth of a firelighter and is easy to light – as I said before ‘down right common sense’.