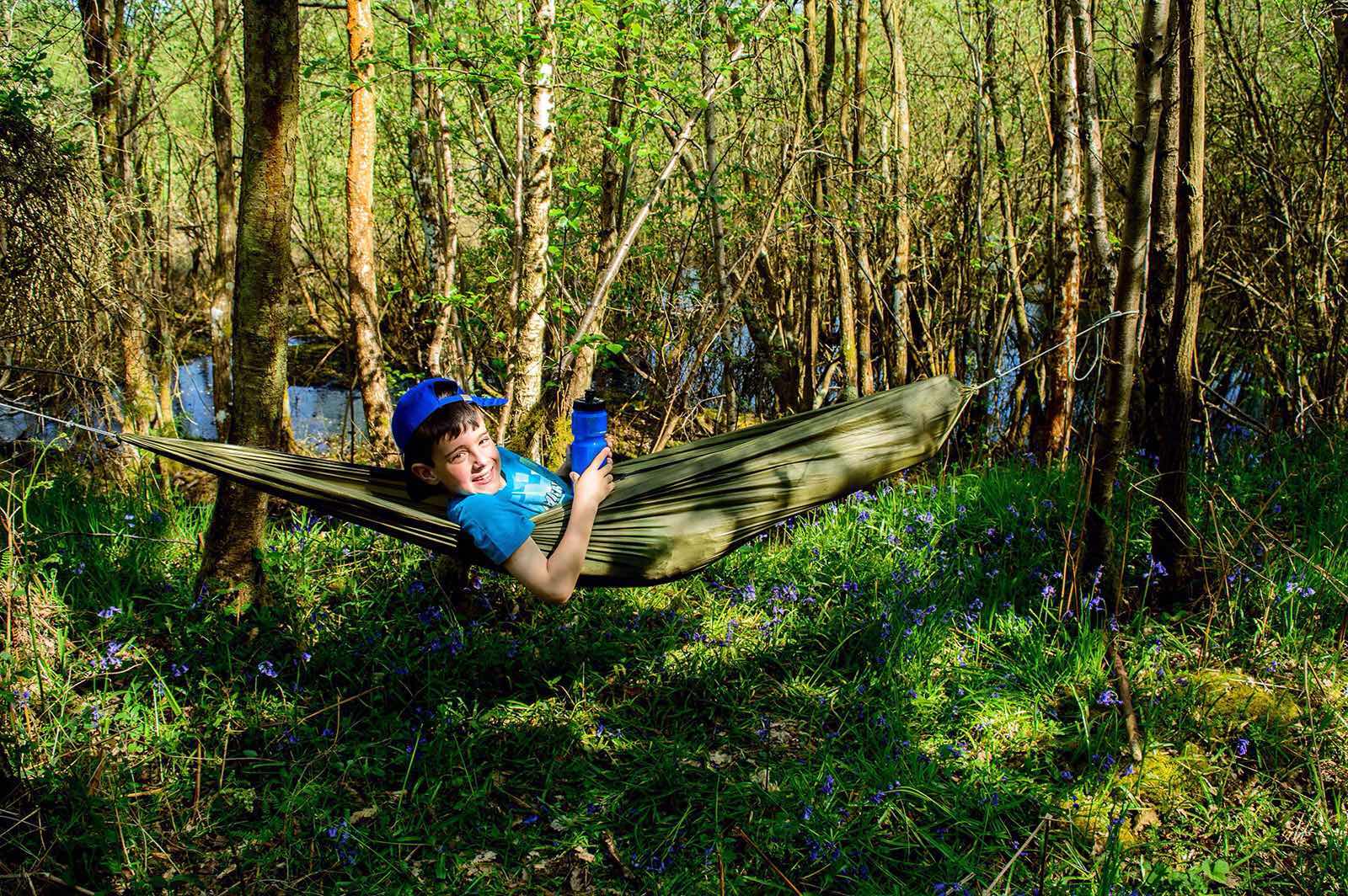 My little lad Finlay is a member of the Bramley Cub pack and when he was invested recently we received a little book on all the badges they can work towards.

There are badges for hiking, navigation and nature observation (amongst many others) so we decided to get out last Sunday and start earning some.

Now this was not a usual bimble around the village but a proper hike. Finlay packed his rucksack with water, food, suncream, waterproofs, map, compass and a first aid kit. The manual stipulated that the hike needed to last for at least three hours and have a purpose.

Our hike was to be around Wasing Wood near Tadley in Hampshire and our purpose was to learn to navigate and to forage (and throw in lots of fun in the middle).

Very soon we spotted a clump of white flowers which turned out to be three-cornered leeks ( the leaves have three distinct corners) and some very fresh-looking beech leaves.

At this time of year the leaves of certain trees are quite edible, beech being one of them. Over the years Finlay has often foraged with me so I was not worried about him having any sort of reaction to anything he would be nibbling on. The walk was more about him learning the key features of certain plants for future safe identification. We left the leeks alone but had a munch on some of the really fresh beech leaves.

One tree that Finlay knew well was the oak, but to help him remember its leaf shape we likened its lobed leaf structure to that of his ear lobe. Also we investigated the very fresh-looking gall we found on one of the oaks. There was no hole in it so we concluded that the gall wasp had not hatched yet.

The next tree we came across was the hawthorn and Finlay’s first observation about it was that the leaves were much smaller than the oak leaves and had smaller and sharper lobes. As this is an edible leaf  we were soon munching again.

I introduced Finlay to the Ordnance Survey map for our area and soon he was busy identifying different features on it and tracking our route. We looked at setting the map using features on the ground and using the compass. Also we discussed the scale of the map and features we would expect to find along our route.

We devised a route that was on public footpaths around Wasing Wood (and which had been well documented in a local guide book) however it soon became apparent that the footpaths we were using had been used little recently. The path was overgrown with hawthorn trees and it had also been cut in half by a local business as a testing area for diggers. Soon we were well off our intended route but by looking at the features around us we were able to keep track of where we were.

It was not all hard work as the hammock seat came out when we stopped for a snack (Finlay got it, not me). As well as trees we spent time identifying flowers.

There were plenty of bluebells, a few wild strawberry flowers but we did get down close to look at some Greater Stitchwort – a beautiful little white flower that has medicinally been used to help with the treatment of broken bones.

Strangely, when we were crossing a stile we came across a pair of boxer shorts lying on the ground. Not sure what to make of this, we hurried quickly along :-).

Now no trip out into the woods is complete without a little extra iron. There were plenty of new-growth nettles around and we picked a few ‘tops’ (the smallest leaves from the very top of the nettle), rolled them up to kill off the needles and munched away.

Finlay is happy to eat nettles now (he takes delight in doing this in front of other kids) though I am still working on him collecting them himself without gloves.

Nettles though have a habit of biting you if you do not keep an eye on them 🙂 Finlay was picking a leaf from a ‘Jack by the Hedge’ plant for a little nibble when one of them sneaky nettles popped up and bit him on his arm.

Now a number of years ago he would have let out a loud wail and run about looking for a dock leaf. Now he knows to simply tell me he has been stung and I will grab a couple of the bigger nettle leaves and squish them up to a pulp. It is the juice of the nettle/plantain/dock (to name just a few) leaf that negates the sting – not just rubbing a dry dock leaf on a sting, which I have seen countless people do.

Before we knew it we had been out for over three and a half hours and diner was calling (Alison had insisted we be back in time for tea as we were expecting visitors). Out came the compass and after another quick lesson we were off through the woods and back to the car.

Finlay had collected a few of the leaves from the trees we had studied but they soon wilted with the sun because they were so fresh. He collected holly, oak, hawthorn, birch, beech and sycamore leaves and spotted bluebells, stitchwort, leeks, wild strawberries, Jack-by-the-hedge and nettles.

The purpose of our hike was to study some trees, flowers and learn about the map and compass. I think you could say we managed that.

6 Replies to “Foraging with Finlay”