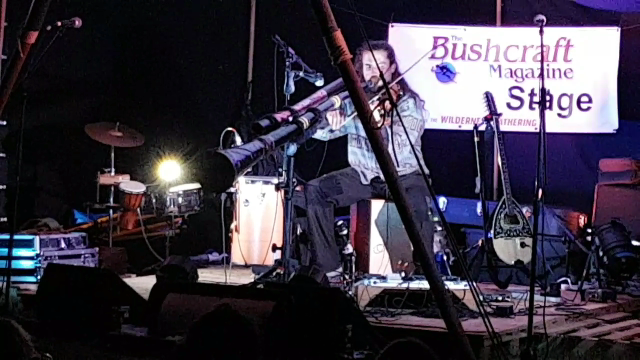 Over the last few years one of the changes I have seen at the Wilderness Gathering is the quality of the music in the evenings – this year it was particularly great.

Roger Harrington of Bison Bushcraft and Dom Harvey (they run the Wilderness Gathering) had great music playing each night however I was particularly struck by one young musician – Vojta. He is a violinist at heart but somehow brings in many other instruments to his sessions.

Here is the last number he played at this years Wilderness Gathering.

No series on the Bushcraft UK Bushmoot would be complete without a mention of ‘Ye Naughty Corner’ – I will refer to it as the NC in the rest of the post.

The NC is many things to many different people who visit the Bushmoot. There is usually a fire on the go at most hours however it is in the evening that the NC really livens up. Some folk love the place and spend a lot of time there, some folk just pop in for a visit every now and then, however some folk steer well clear as it can be busy and noisy. I personally like to visit the NC of an evening and catch up on the days goings on around the fire while enjoying a medicinal tot or two.

Cap’n Badger and Mad Dave (our resident Pirates) normally manage the NC though Dave had to miss the Bushmoot last year. The NC has been around for a number of years now and it has grown in size as each year has passed. Some say that is a good thing and others do not – you will need to decide for yourself.

It has always been a noisy place in the evenings (folks are warned about it if they camp near it for the first time) and as a regular over the years I am quite comfortable there however as the feel of the NC has changed from a small to a big community some folk have drifted off elsewhere on an evening.

The central point of the NC is the fire and it makes for a great woodland TV. On some of the busy nights you will be lucky to get anywhere near it however if there is a decent stock of wood it is soon lit up well. I have snapped many a fire face picture in these flames over the years.

One thing you are guaranteed is the option to try out a number of different tipples while sitting around the fire. There is usually a bottle or two of Kraken rum, meade, port or whisky making the rounds to try. The nost memorable one for me was when I was passed a bottle of Dave Budd’s Chilli rum – never to be forgotten.

I think one of the reasons the NC has become so popular is that there is usually some music and food on the go.

Initially folks would cook there own food and come along to the NC for a drink and a chat. Nowadays our resident Phil is on the go all night cooking and serving a wide range of excellent food (we do run a group kitty to cover the cost of the food).

A couple of years ago Tim Neobard ran a class at the NC to build a cob oven for baking pizzas. The pizzas proved to be very popular with the residents of the NC so everyone was looking forward to having some pizzas the following year.

When we returned last year we found that someone had decided to destroy the pizza oven. Un-dettered Neil re-built the oven this year out of brick instead of cob so hopefully it will be there this year.

I like to pop by the NC during the day to see what is going on. Sometimes it is pretty quiet as folk are off at all the classes however sometimes you will find a class or two going on at the NC.

A few years ago one of our regular NC residents Drew Dunn passed away in a road traffic accident. This tragic loss really affected many of us at the Bushmoot as we had grown to love Drew. When I met Drew for the first time his first words to me were ‘Where can I find the Naughty Corner’.

Drew loved the NC so much that Cap’n Badger and Mad Dave organised the planting of a tree and plaque in his honour. The tree and plaque sit just behind the NC where Drew used to camp.

The NC does throw up some strange sights I must admit. A few years ago this massive net was strung up and it was termed the Mammock. I have no idea how many folk got crammed into the Mammock in the end but it proved a star attraction.

Each year a fancy dress themed night is run. Last year it was Monty Python, the year before it was a Victorian explorer theme and I think next year it is a horror theme.

Not something I have gotten round to doing but there are plenty of folks who do and they do put in a lot of effort to look the part.

As the evening gets on though the reason why the NC corner gets its name starts to become apparent. It might be that you find yourself getting covered in lots of little clothes pegs if you are not careful, you may inadvertently get passed the bottle of chilli vodka, or you may get buckarooed if you fall asleep.

There is an skill to buckarooing as you need a steady hand. The poor soul who is asleep has tins of beer (empty) and pegs (and other adornments) heaped on top of them before a picture is taken. Everything is then taken away so that when the poor soul wakens up they are none the wiser until they see the picture the next day.

I appreciate that the NC is not for everyone as it can be a busy and noisy place however I personally like to spend an hour or two of an evening there.

To me it is one of the highlights of my year where I can relax and have a bit of fun while catching up with my friends.

There are plenty of campfires to visit at the Bushmoot where you can sit and relax and chat. The NC is just another one of them however it is one of the livelier ones.

Maybe see you there this year.