This is the second of my blog posts on the Aures campfire crane trilogy. I call it the Gibbet crane based on a pot hook I found mentioned in the book Camp-lore and Woodcraft. The crane does look a bit like a traditional gibbet but the name apparently refers to the overlapping joints used in its construction rather than its likeness to an instrument of execution.

This is a great project for the longer-term camp or if you want a bit of practice carving joints and whipping.

As usual the tools for making the crane are to be found in most bushcrafters’ backpacks – a knife, saw and axe. I saw this crane set up many years ago at a camp however I have seen little written up about it in books or online.

I found one piece of wood with a strong fork and a smaller catapult-shaped fork (bottom left below) and I cut a limb with a branch coming out (top left below).

The first job I did was to strip off all the bark from all the pieces.

To begin with I trimmed the top limb at its mark with my saw, leaving the bottom one for the moment.

I laid the small hook beside the end of the top limb so that the hook was pointing towards the big fork and marked where I wanted to trim it. I did not want to leave it too big – just big enough to be whipped to the big fork.

I wanted the joint to be strong so I put a stop cut into the top of the upper limb so I could cut out a lap joint (also known as a Gib joint).

I then battoned off the excess so I was left  with one half of the lap joint, then I trimmed the bottom of the small hook flat to fit snugly against it.

Not a perfect fit but good enough.

I then used paracord to whip the two together, on both sides of the hook. I left excess string tied in a knot as the wood was green. As it dries out the wood will shrink and I will have to redo the whipping.

I flattened the upright of the ‘Y’ piece and split out a Gib joint on the lower limb. You have to make sure all the cuts are done on the correct planes so that the hanger will fit on the upright pole without twisting.

After a bit of whipping it was time to set it up and make sure it worked correctly. In the bottom right picture you can see clearly how it all comes together.

I have a particular way of carving the hanging arm (you be as creative as you like). I axe out the basic shape I want, trim it smooth with my knife and cut in lots of grooves along the upper part to allow the pot to be hung on various areas of its length.

Once all the grooves are cut I tend to put a dimple in the end so I can attach an adjustable pot hook. This allows me to hang two or three pots from the crane.

With light pots you do not need to remove the pot but just lift the crane slightly so it detaches from the upright and then just move it up and down.

In this picture you can see how the arm works with an adjustable pot hook attached to the end of the crane arm.

It looks precarious but with the usual level of care you take around any fire I have found this system works well.

Dinner could be in one pot and the kettle on the other leaving plenty of room to sit comfortably around the fire without having lots of uprights protruding out (which can be a problem with other campfire cooking rigs).

I took the set up out on a recent bushcraft course I was running to show some colleagues and set it up with a fixed crane. All in all it worked a treat.

If you have not seen it I have another post on making one of these cranes but just out of one forked stick – How To…. Carve an Aures Campfire Crane – Single Fork 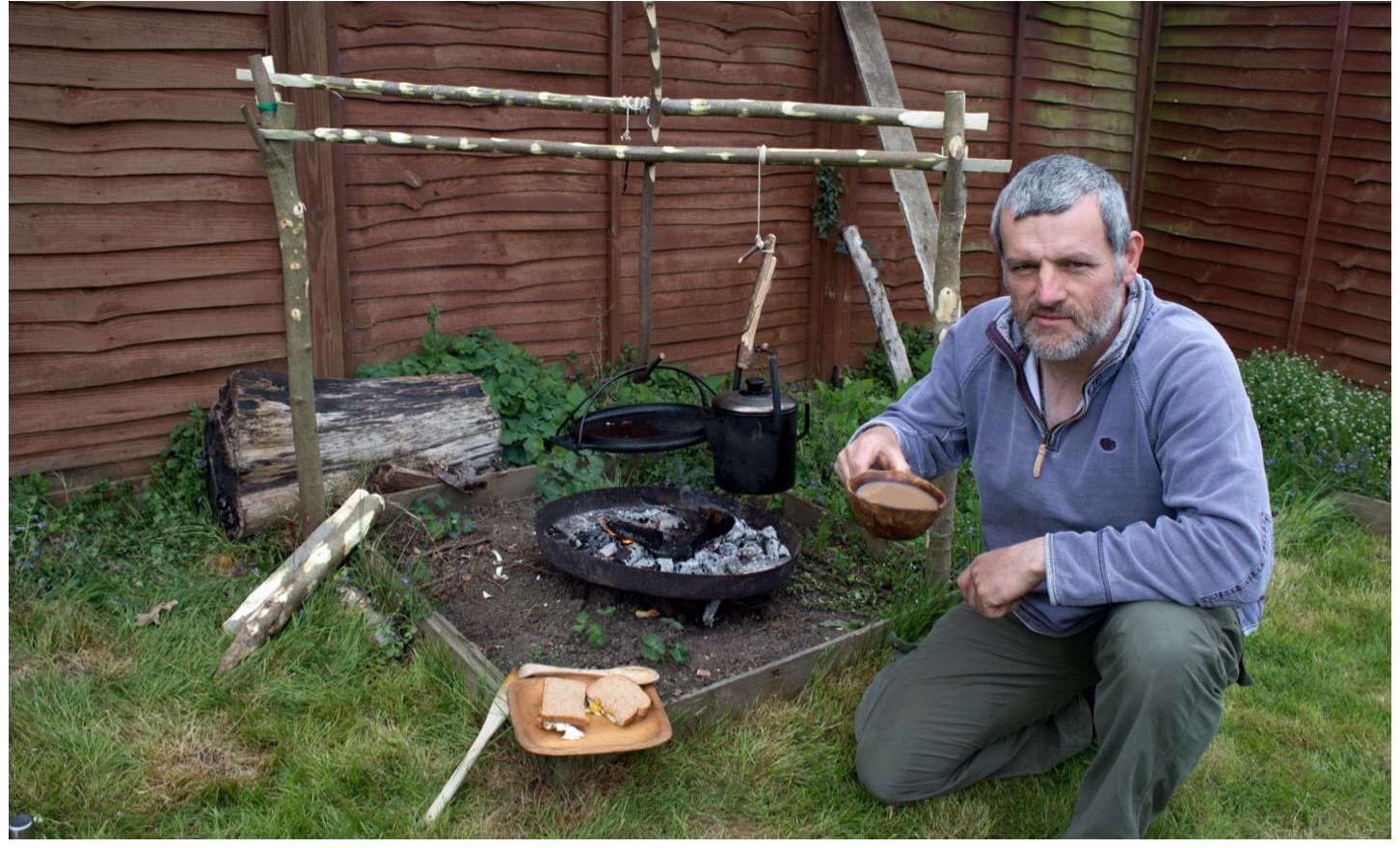 A few years ago at the BCUK Bushmoot in South Wales I ran a class looking at different campfire cooking set ups. As well as showing the students my set ups I had asked them to bring along examples of their own if they could. One that caught my eye was from my friend Steve Mesquite Harrall. It consisted of two forked uprights and a top bar that could be turned to raise or lower a pot that was suspended beneath it on a piece of string.

Steve had learned this from Wayland of Ravenlore Bushcraft and there is a good picture of the set up on Wayland’s Ravenlore site – Hang up your Billy. Wayland told me he’d got the idea from a book by the French adventurer Nicolas Vanier called ‘North’. The rig did not have a name and it was Wayland who used the term French Windlass (Windlass meaning to ‘haul or lift’). I have just added the ‘Double’ so I can cook with more than one pot.

I really liked this rig when I first saw it but soon felt the need to be able to adjust the height of more than one pot at a time. You do not easily find two decent poles with a double fork in the right place to do this so I had to come up with another idea. The solution in the end was so simple that I had to laugh at my own stupidity for not thinking of it quicker – just make a new fork by splitting the pole above the natural fork.

The basic parts I used were one small piece of wood to make a pile driver (I’ve heard this called an El Salvadorean pile driver) to create holes for the uprights, two forked uprights and two poles to act as spars.

I trimmed a point on the piece I was going to turn into my pile driver first. I used a small round of wood to act as a work surface and kept my axe work to the far side of the round for safety.

Once the point was finished I put a chamfer on the top of the pile driver by cutting out little pieces of wood all around it. Doing this helps stop the pile driver from splitting as you hammer it into the ground to create your hole.

As the pieces I picked for the uprights were fairly thick I had plenty of wood to split to create my second fork. You need to ensure that the split you create is on the same plane as the natural fork.

To batton safely, make sure the bottom of the upright is secure and hold the axe so that the blade is at right angles to your body. I used the pile driver as a batton to create the split. Once the split reached the level of the natural fork I stopped.

I took one of the spars and carved a triangular end to it – the thin end of this will be the wedge to hold open the split in which the spar will sit.

I used the pile driver to batton the wedge down into the new fork until it reached the whipping. Then it was a case of just trimming the wedge to finish.

I felt that my fork needed to be a little bit wider still so with my knife I cut out some wood from inside the fork. Once that was done it was a case of giving the upright a pointed end and trimming off any knobbly/sharp pieces from it.

The second upright was produced in the exact same manner and they were soon both ready to go.

The rig works on the principle that the weight of the pot locks the spar into the forks on the uprights. To make this work you need to carve triangular-shaped ends to your spars (Wayland likens this to a prism shape on his blog). I ensured that the points of the triangles at each end of the spars matched up with each other. Take your time with this and before each cut ensure they are lined up.

The ground where I was testing this out was at the back of our garden in an area that was about to be weeded and planted so it was a little soft but even so if I had just hammered the upright into the ground it would have split the top fork. The pile driver came into its own here as I was able to really hammer it into the ground (try and make your pile driver slightly smaller in diameter to the upright to get a snug fit) and create a hole for the upright.

Once the first upright was in I gauged the distance to where I needed to put the other upright in using one of the spars and repeated the process starting with the pile driver and then gently tapping in the upright.

Check your alignment is correct by lining up the forks and place both spars into their forks. I tested the spars were locked in place by trying to turn them gently. No need to force them as the weight of your pots will lock them down further.

I took this shot to show you how the spars fit into the forks. All very basic but works surprisingly well.

To suspend the pots I used some old string and tied it on with a clove hitch  and then a couple of overhand knots to finish. I did not make them overly tight because I wanted to be able to release them easily  to re-position them. Once that was done I attached the hooks. Use whatever knots you are comfortable with but make sure they and your string will hold the weight of your pots when full.

If you are worried that the string will burn then dampen it with some water (avoid string that will melt easily). I have never had the string burn through as when I am cooking I do not let flames grow big enough to go near it. Also when starting your fire ensure that the spars are not in place so that the initial flames do not burn the string.

Once you are cooking it is very easy to lift and rotate one of the spars to raise or lower a pot by winding or unwinding the string. As we were boiling some water in the Dutch oven I got my daughter to help me but if the pot is light enough then you can do this easily by yourself.

I also use another style of pot hook quite often (I learnt this from one of Ray Mears’s videos) which involves the use of a lark’s foot knot. All you need is a small loop of string that is able to go around the spar and through itself to leave a smaller loop to insert a traditional adjustable pot hook. To raise the pot all you need to do is loosen the lark’s foot and re-position it on another hook.

This is the set up from various angles so you can see how all works in more detail.

I am glad I finished this little project as it has been on my list of things to do for a while now. It is a great set up that does not take long to do and it’s an easy way to cook foods that requires different temperatures at different stages.