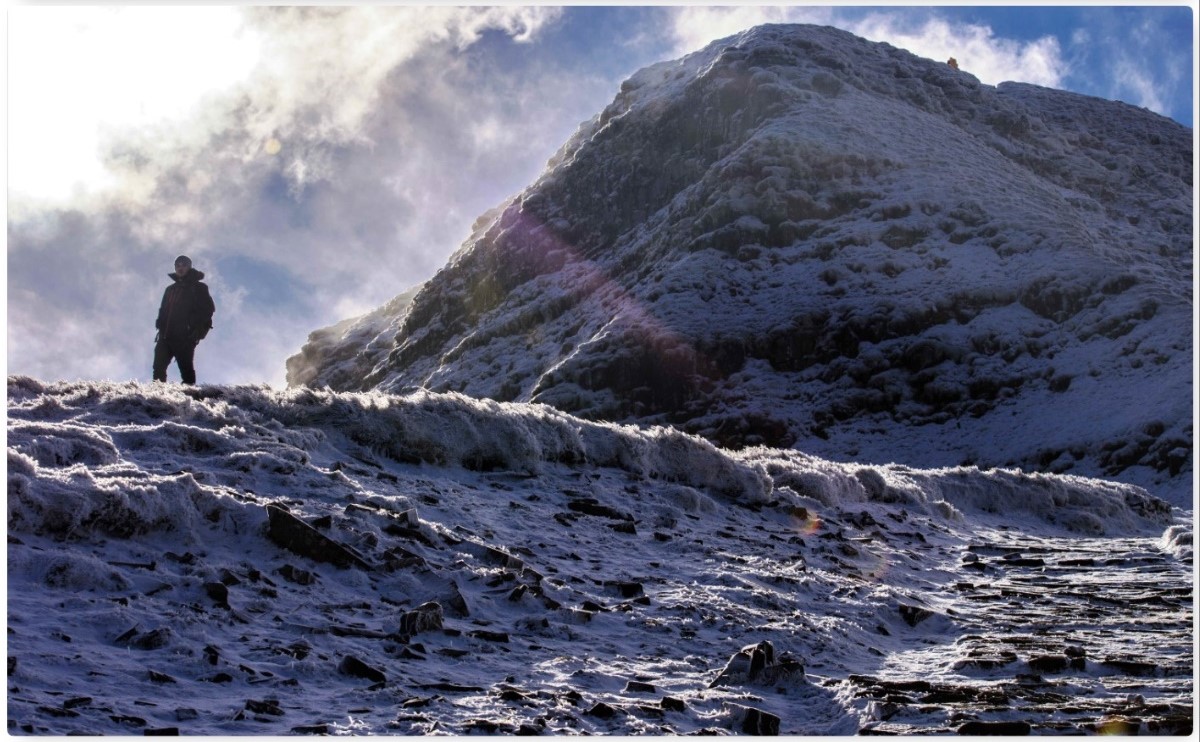 The beginning of this year was the end of an era for the Adventure Training team in London Area Sea Cadets: our bosses Perry Symes and Graham Brockwell were standing down from their roles as Area Staff Officers after many years of hard work.

So to celebrate we headed off to the Brecon Beacons here in the UK for a ‘Dining Out Weekend‘.

It was a weekend of many parts – once we had settled into our bunkhouse at Gilfach Farm it was time for a ceremony of handing out certificates to those students who had recently passed their Basic Expedition Leadership Award.

Kev Lomas awarded Perry and Graham a cuddly neck teddy each to carry about for the weekend. Then it was off to the pub to get some dinner (a beer or two) and to plan for the next day.

After a good breakfast I had a wander outside and was greeted by a cracking view of Pen Y Fan in the distance. She had a light smattering of snow however the skies were clear.

We were soon off in the cars and mini bus heading for our start point at Cwm Gwdi car park (old soldiers may remember this camp). This spot allowed us easy access up onto Pen Y Fan without all the masses you will find on the route up from Storey Arms.

The majority of the group were outdoor instructors and all had worked with Perry and Graham in one way or another over the years . Today though the emphasis was on ‘doing your own thing’.

Alan and Dave Lewis went for a low level walk as Dave was carrying an injury while the rest of us set off up the Cefn Cwm Llwch track on the northern slopes of Pen Y Fan. The going was wet underfoot at first however we soon climbed above the snow line.

We snaked along the path, well spread out, enjoying the views and chatting as we went along. I decided to record my very first Live Facebook video on this part of the walk. The videos were not top quality because of the weak signal and wind noise but I enjoyed making them.

I spent most of my time scouting out good photography positions and ordering the lads to pose for me 🙂 Kept me happy and I think everyone liked that they could for once go at their own pace and do their own thing.

The final bit of the track up to the summit was quite icy but safe enough if you took your time. Once on the top it was like Piccadily Circus with all the folk coming up from the Storey Arms. We soon got the pictures taken and Ben found time for a few push ups before we set off.

It was at this point we broke up into three groups. The first set off at breakneck speed to ascend Cribyn and Fan Y Big. I bimbled along with the middle group but soon left them, ascending to the saddle below Cribyn. After a break on Cribyn I descended off the hill on its Northern slope down the Bryn Teg track where I met the third group being led off the hill by Jacques.

Soon the teams met up again and while Jacques sped off to pick up the minibus James produced a rugby ball from his bergen (there was not much else in it). I asked him why he had not produced it on top of Pen Y Fan and he said he forgot (would have been an excellent photo opportunity). Anyway the guys had a good half hour mucking about and doing the odd ‘Dab’ on the side of a bridge.

The Saturday evening was spent in the Red Lion pub in Llangorse enjoying a slap up meal. We were given the upper floor to use and it was probably a good move on the staff’s part – it got pretty noisy at times.

When I arrived though we were all downstairs in the bar and some of the guys were playing pool. They had been there a couple of hours to watch England play in the Six Nations rugby championship. I was standing at the bar when one of the locals approached. ‘Be careful,’ he advised me, nodding at my kilt, ‘There’s a bunch of rowdy English fans in the bar.’ I looked over his shoulder – then back at him – and said that it was OK, those rowdy English fans were my so-called mates 🙂 His face was a picture!

The evening was a great success with good food, plenty of wine, speeches, and a few war stories before retiring to the bar downstairs.

In the morning there may have been one or two fuzzy heads as we packed up and made our way to Dinas Rock located in the South of the Beacons. The plan was for some of the guys to do some Mountain Leader ropework on the rocks while the rest of us headed off to the waterfalls at Sgwd Yr Eira. In the end no one got there as we all kind of split up (after going the wrong way initially) and did our own thing.

I found a nice spot to sit in my hammock by the river while Jacques as usual dived in.

It was a fantastic weekend and it was great to be part of it. I think the pictures confirm that Perry and Graham had a great time. Below, pictured in between Perry and Graham, is Ben McDonald, the latest Mountain Leader to the team who has taken over Perry’s role as Sea Cadet Area Staff Officer (ASO) for Adventure Training in the London Area. Perry aims to stay on as the Assistant ASO for a year before stepping back totally.

The guests were (in no particular order):