The London Area Sea Cadet Adventure Training has run over the last few years a couple of Level 3 Certificate in Basic Expedition Leadership (BEL) courses for our instructors. This is a nationally recognised qualification and we as a team have worked very hard with the trainees to get them trained up and assessed. Our training team in the London area has grown quite a lot now with more and more camps taking place.

The downside to this was that as more and more cadets were being trained up there was a point when they hit 16 years old there was little in the way of camping qualifications we could offer them. My boss Perry Symes has worked hard to bring in a brand new qualification for these 16 and 17 year old cadets – the Level 2 Award in Assisting in Basic Expedition Leadership (BEAL).

The course comprises at least two training weekends, a couple of weekends where the cadets assist on other camping courses, and an assessment weekend.  The first training weekend this year took place in (for once) a rather sunny Ashdown Forest. Most of the training takes place outside but as we were also using Crowborough Army Camp we did have the use of a classroom as well.

We had six cadets over the age of 16 on the course but could have had another six if they had not applied too late. The course instructors were Perry Symes, John Kelly, Liz Rowan and myself. John and Liz passed the BEL a couple of years ago so they came on the course to gain valuable experience. John in particular is working towards his Walking Group Leaders award so running this course will give him valuable experience.

We also had another course running alongside this one for the younger cadets covering all the subjects for their Basic Campcraft badge. This course was run by Dave Lewis, Charlie Brookes, Lloyd Martin and Dean Barnett. Lloyd has passed his BEL course recently as well so it was good to see him in action and Dean is just starting out in his training to becoming an Adventure Leader.

While the BEAL students were doing some class work, Dave and Charlie had the younger cadets put up my tipi. They used this over the weekend as a group shelter and temporary classroom, and some of the cadets slept overnight in it.

In between all the classes we do try and have a bit of fun wherever possible.

Both teams set out in the afternoon on the Saturday to focus on navigation. The young ones at this stage get an introduction to using a map and working as a team in the outdoors. The BEAL students had already shown us they could use a map and compass in the morning so we set them to work in pairs with some challenging places to find.

On our travels we came across the memorial plaque to A.A. Milne. There are fantastic view from this spot so it is great for more macro work with the compass. We got the cadets to take ‘back bearings’ on known locations they could see to identify exactly where they were and also to use their compasses and maps to try and identify far-off unknown features they could see.

Perry wanted a proper picture taken of him but I seemed to get in the way:-)

What we aim to do with this course is to train the BEAL students up to a standard that can be assessed for a nationally recognised qualification so that one day they can take over from us. In the meantime I am very happy to continue teaching outdoors skills but recognise that one day others will need to take our places.

While we were doing compass work the younger cadets had found the Airman’s grave. This is not an actual grave but a memorial site to the crew of a Wellington bomber that crashed here on the 31st of July 1941 returning from a mission over Germany.

Later that evening after all the classes were finished, Charlie, Liz and myself took the younger cadets off for an evening’s walk. I insist that the cadets do not use torches to show them how quickly their eyes adjust to the dark. Most of these cadets had never walked in the woods at night, let alone without torches. Thankfully we had a good moon that night with a clear view of the skies.

I took them down to an area of the military camp that is heavily wooded but is the site of some old World War 1 training trenches. In no time the cadets were running all over the place having a great time and had totally forgotten that they were nervous about being in the dark. We took them through various types of woodland and heathland and also met the Royal Marine Cadet instructors out training.

Just before we got back to camp we got the torches out and cut up some dead standing wood for a fire to toast some marshmallows. On the way back after this we managed to get a bit of star gazing in as well.

One of my usual nightly chores is to carve some marshmallow sticks for the cadets to use. Thankfully though we have some good willow shoots nearby. While I was doing this Charlie was teaching Dean how to light a fire properly and maintain it. I got this little video of it all in between carving the sticks.

After the fire got going it was time for a photography shoot to get some fire faces. You can see a small one on the left in the bottom picture.

Next morning in between classes I managed to get some time in spotting some unusual fungi (cheers Liz for finding these) and a bit of spoon carving. I have a tutorial on carving this spoon here – How To…. Carve a Simple Spoon: the double-handle technique.

It turned out that running these two classes at the same time worked quite well. The younger cadets had to learn all about camping like using stoves and the BEAL students had to re-learn the same subjects so that they could prepare themselves for teaching the cadets themselves in the near future. In the top picture Perry is showing the cadets how that if a gas bottle is shaken too much it may flare up and become dangerous.

While Perry got on with the class with all the cadets and other instructors Dave took a well earned break and I got my sleeping bags out for an airing.

Part of the course is designed to get the BEAL students to come up with different ways to get the learning across. Here they are using Charades to explain the Country Code. They felt a bit embarrassed at first but soon got into it.

It is not often you come down to a weekend at Crowborough in March and manage to make fire using parabolic mirrors. I even found a nice honeysuckle-wrapped shoot that could be turned into a nice walking stick. I gave it to Dave as I’d broken one of his walking poles a few years ago – it was after he had tripped in a ditch and bent it and I had tried to straighten the thing 🙂 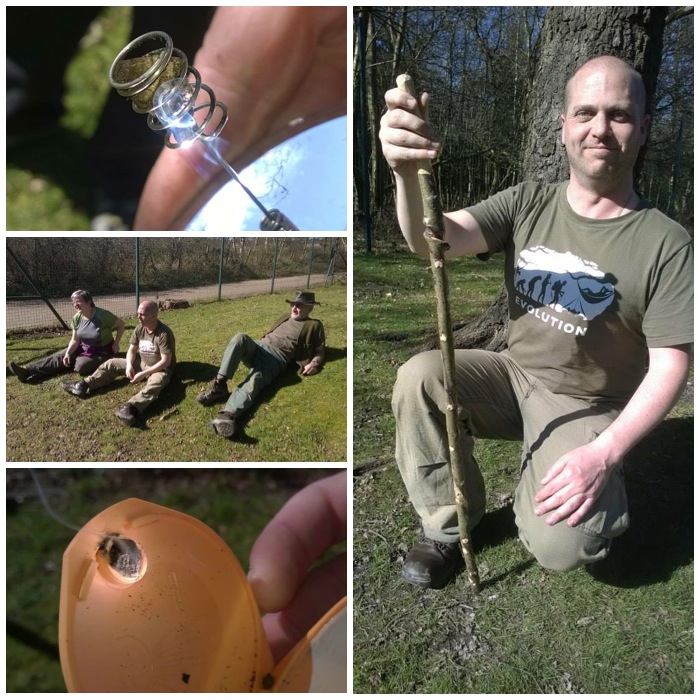 That was the end of a very successful weekend. All the BEAL students went off with areas of navigation to work on and a date for another course which they would help to run. Some of the new instructors gained some valuable experience and I got a lovely sunny weekend in Crowborough – not often I can say that in March.

I am looking forward to the second training weekend later in the year for this course.