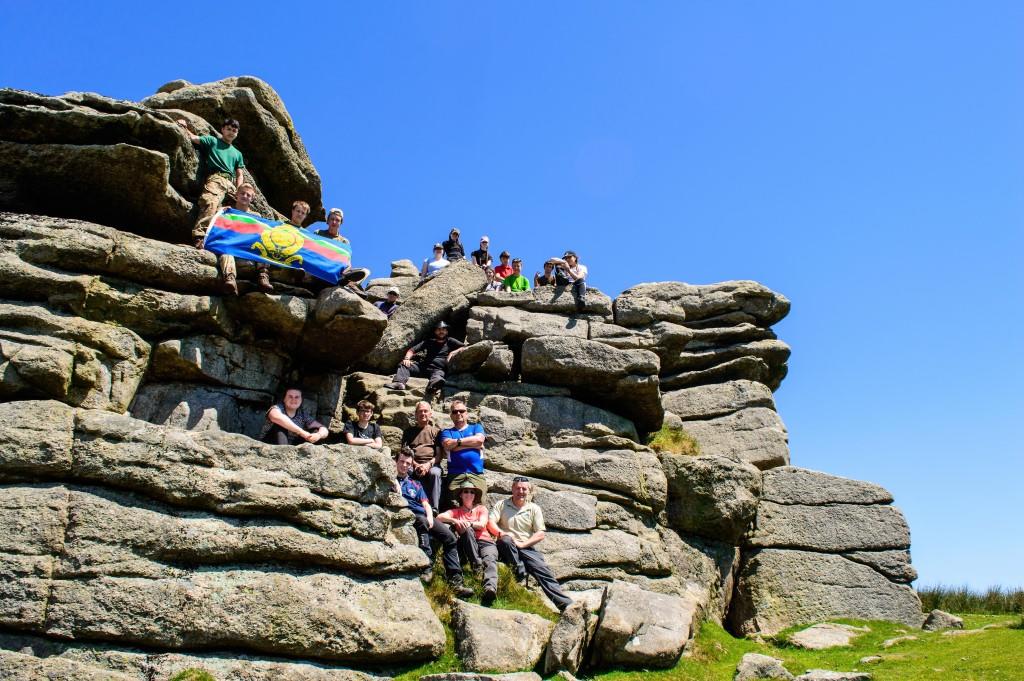 It was time to head back down to Dartmoor early in July with Sea Cadets from our London and Southern Areas to run a Gold DofE practice expedition and boy was it hot.

These training expeditions have one day of training on the Moor for the cadets and staff who are doing their Gold DofE followed by 3 days of remote supervision. We tend to stick very close to the groups on the first day of remote supervision and then as everyone gets their navigational eye in we tend to just meet up with them from time to time.

Early in the morning some of our trainee instructors (doing their Basic Expedition Leadership Award) ran some classes on kit to carry and map work. Around 11am we headed out to just south of Princetown to get in some navigational time on the Moors and we soon found the temperature starting to shoot up.

Everyone was in light order for the training day with plenty of water and sun cream. You can see from the pictures below just how hot it was with all that blue sky (and for a Scotsman let me tell you it was not comfortable). Each team had an instructor with them and were soon off onto the Moors testing out their navigational skills.

There were plenty of adventures along the way and I spent time skulking in a Dartmoor Leat (a man-made stream) photographing and filming the wildlife (I will put up a separate blog on this sometime) and even caught sight of someone paddle boarding along one.

The next day the teams were let off on their own and we headed up onto the Tors to keep an eye on them. We had plenty of radios and one team even had a tracking device on them.

The visibility was clear and we soon saw them on the move. One team made good progress over the Tors but two took a slight detour and had to be shunted back on course. 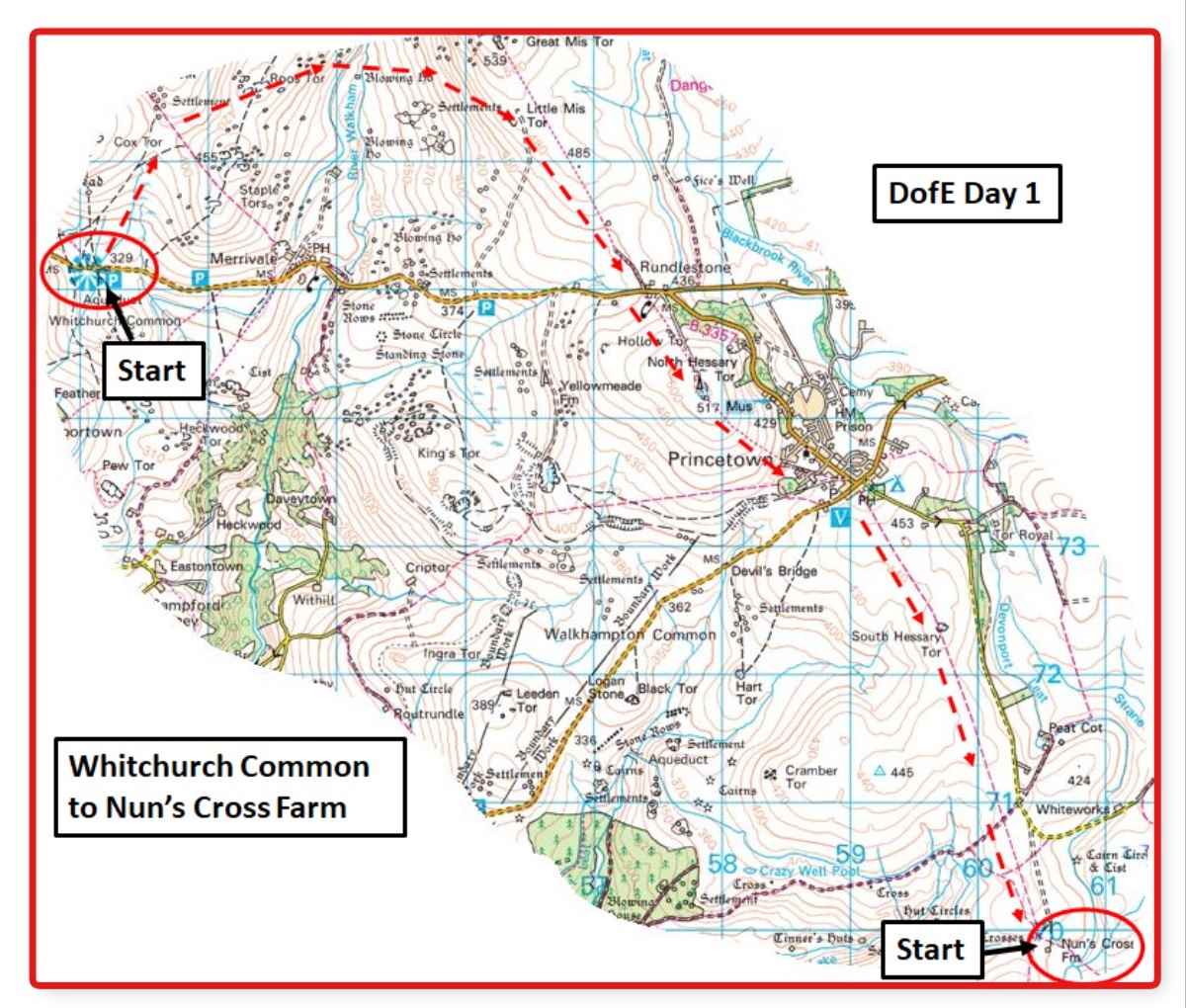 Luckily we had plenty of staff with us and everyone eventually made their way over the Tors. The temperature was soon rising again and we made sure everyone had water at each of the checkpoints (and an ice-cream in Princetown).

As usual we stopped for a picture on one of the Tors (Little Mis Tor) and watched the helicopters playing about on the Moors. The Tors offered some respite from the heat of the sun with their lovely shaded north-facing nooks and crannies.

Coming off the Tors we met up with Alan Lewis (the Old Sea Dog) and more of the all-important water. I pulled out a chocolate biscuit from my pack only to be confronted with a sticky mess – it still went down the hatch 🙂

The teams were soon off up over North Hessary Tor (under the mast) and down into Princetown where we told them to get some ice-cream.

The campsite for the teams was south of Princetown at Nun’s Cross Farm. It is a fairly wild camp but with easy access for us with vehicles.

Some staff stayed near the campsite and the rest of us headed back to the campsite at the Plume of Feathers Inn in Princetown. This campsite has a stand of trees running up the side of it for our hammocks – always a bonus on Dartmoor 🙂

On the way back to camp we spotted a fallen lamb being comforted by a herd of cows. It looked like the heat had really gotten to it so Chris, Carol and I gave her (I think it was female) some water to drink – she took nearly two water bottles. Chris also sprinkled water over her body to cool her down. We tried to get her to stand but she was too weak. In the end we got the local farmer to come out and take her in.

What really surprised me about the whole scene was the care the cows were taking over the lamb. The were nudging her gently and standing over her to give her shade – quite something to witness.

It was a great day all in all and I particularly liked spotting all the wildlife so I decided to put together a little video of that side of the expedition.

This part of the expedition was to prove the longest and the hardest. Due to the very high temperatures and because this was the practice expedition I decided to tell the teams to go in light order. I took all non-essential kit such as tents and sleeping bags off them to lighten their load in the high temperatures.

I went high with Dave Lewis and the rest of the instructors either went on ahead in vehicles or were trailing the teams from a distance. We got up high quite quickly and had some time to sit back and wait for the teams – amazing where you can hang a hammock 🙂

This part of the route took the teams over to the Eastern side of Dartmoor where the views are quite spectacular down onto the coast.

After a night in a farmer’s field at Middle Stoke Farm, the teams were up and away for their final day on the hills. I had decided to stay off the hills that day as I had felt a torn muscle (from the year before) in my right leg starting to give way again.

The teams headed off up into the hills and navigated along to a village called Scorriton. They had a tough time as all the paths had been little used recently and were quite overgrown (we had been there last year and they were clear) but they were soon coming down off the hills with smiles on their faces. 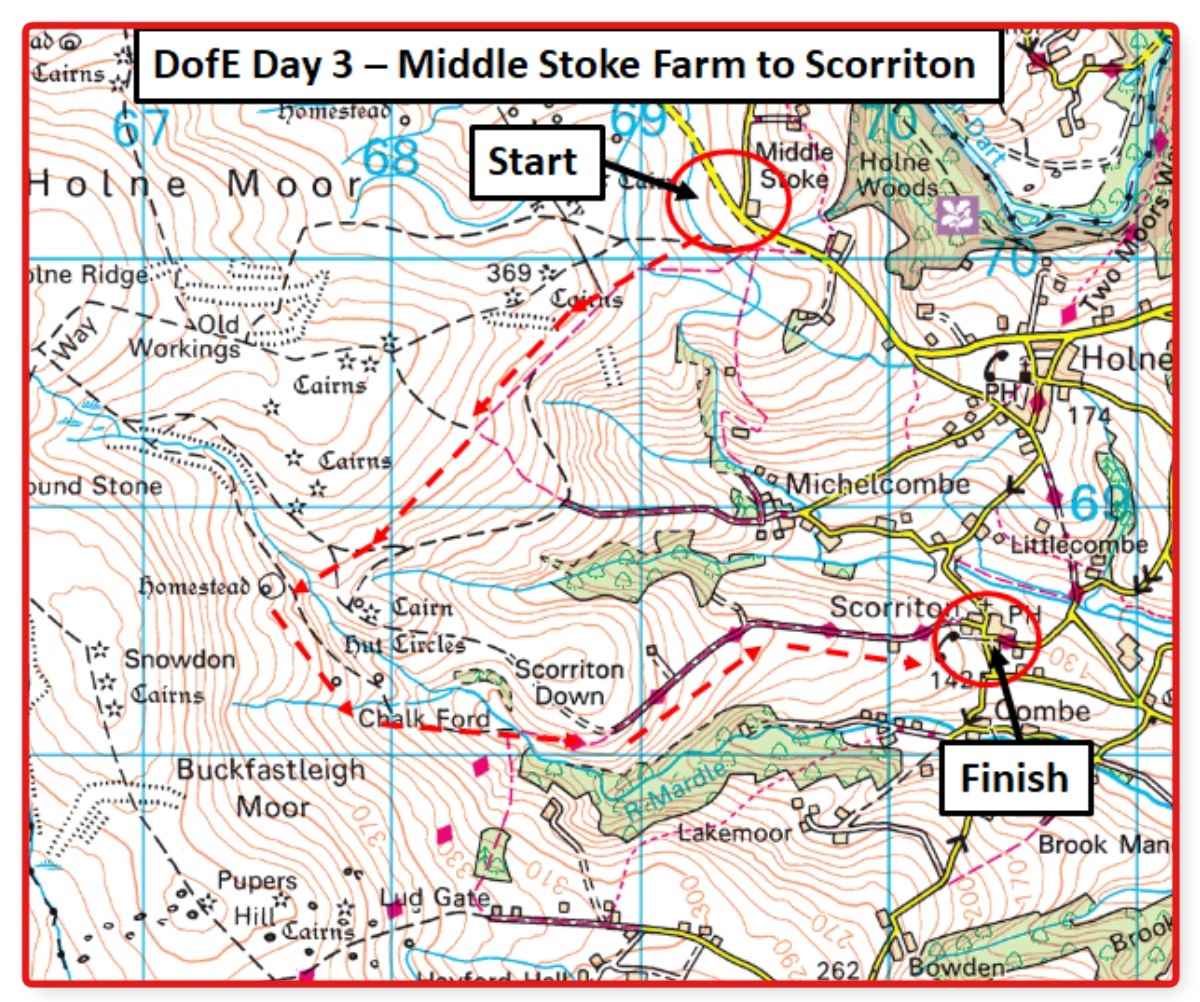 This was a easy expedition for me as there were so many great staff who gave their time up to come along (Boy do I feel old…… I realised that I had trained and assessed every one of them over the years) but it was a tough one for the cadets and staff doing the Gold DofE practice expedition due to the heat – well done the lot of you.

A final video of the trip – one that I am very proud of – both in terms of what was achieved and its composition.